If you didn’t take advantage of the pre-order option, you may not be aware that 5 went live last night.

It’s been less than 24 hours and…I’m already being asked for 6! It makes me laugh and cringe at the same time. I wish I could write these as fast as people read them. But alas, I can’t. However…we MAY be in luck. Kind of. Caldera 6 MAY have already been written and MAY be in the hands of the editor as you read this. I say ‘MAY’ because from here on, everything is out of my hands. I MAY have started 7, but fighting this horrible case of MAN FLU that my daughter brought home has really put a damper on things.

Anywho, I am thrilled to say that the plan is to get Flags of the Forgotten out mid-June. Hopefully in time for my birthday!! (hint-hint to the powers that be) If you’ve been hiding under a rock, then let me tell you, Flags is my crossover baby. I’ve been writing in the horror/urban fantasy genre for so long but I always wanted to try my hand at something along the lines of a political thriller. This one isn’t so much ‘political’ but the betas who test drove it said that it definitely measures up in the thriller department, so I’m running with it!

Here’s a teaser for those who can’t wait for Caldera 6. It’s just the cover, but at least now you’ll know what to look for when the time comes.

Thank you to all of my new readers for the feedback and the positive messages. You can’t know how much it fans my internal flame and helps drive me to keep pushing on.

Posted by Heath Stallcup on May 31, 2018 in Uncategorized

Well, for those of you who were expecting an October release of Caldera and the follow up stories that went with it…I’m obviously a bit late. We had a few editing issues and since I couldn’t hit the Turkey Day timeline either, we switched to the next holiday. 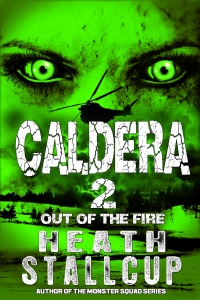 If you click on the pictures, you’ll be taken to Amazon where you’ll see that they’re now available for PRE-ORDER! Delivery date is set for December 26!

Just the thing for those after holidays blues, or to relax a bit after all of the hoopla is done and you just don’t feel like picking up the house yet. Now you have an excuse to lounge about and READ! 😉 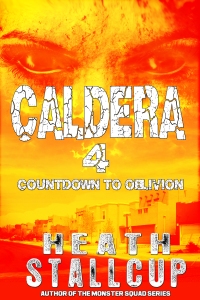 To those of you who were hoping for a Halloween release, I can only apologize. Some things are simply outside of our control and this was one of them. However, just in time to ring in the New Year, you can join Hatcher, Candy and the rest of the survivors as they…well, no spoilers!

Posted by Heath Stallcup on December 10, 2017 in Uncategorized

Maybe viral zombies do.  How about we find out?

Why go with viral rage zombies rather than the slow moving, classical Romero zombies?  A number of reasons really. The biggest being, they seem to be the most likely to happen in real life. With all of the biological weapons being produced, the new designer ‘drugs’ hitting the streets or even Mother Nature herself culling the herd, what would prevent scores of people, maddened with fever to the point of absolute rage, from hitting the streets to enact random acts of violence? It would soon become pandemic.

One look at how easily ebola crossed the Atlantic and entered our borders and you can see that it wouldn’t take much for something that was fast acting to quickly get out of control. How easily could you pull the trigger on someone who wasn’t technically ‘dead’? If they were infected with a virus and there was any hope of a cure? Besides, slow moving zombies gives fat, out of shape people like myself HOPE that we might be able to survive by our wits. Fast moving viral zombies?  Oh heck no…I’d be the guy clutching his chest as I fell to my knees…a veritable human smorgasbord for the starving, angry masses while others escaped.

Besides, my girls absolutely LOVE zombie books, but other than John O’Brien’s NightRunners…they haven’t really experienced any other ‘viral’ zombies.  So, let’s take away the one big weakness from his nightmare inducing monsters and give the crowd another reason to remember Rule #1…Cardio!

So allow me to invite you to spend your Thanksgiving weekend curled up with a good book.  And if you can’t find a good book, read mine instead. If nothing else, it may give you ideas on what else you should toss into your bugout bag should the Z hit the fan. 😉

Posted by Heath Stallcup on November 10, 2014 in Uncategorized