Things In a Box and Other Musings

Those of you who follow my ramblings on Facebook are already aware that the first Monster Squad book, Return of the Phoenix, has been included in a truly awesome boxed set along with five other authors.  Whoever decides to take advantage of this offer will be picking up over a half million written words of some of the best horror on the market. 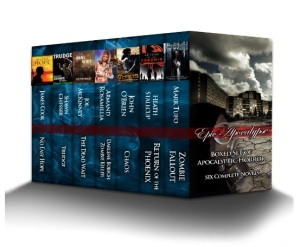 For those of you who haven’t already experienced the wit and wisdom of Mark Tufo, here’s your chance to dive into the first of his Zombie Fallout series.  You also get to sink your teeth into John O’Brien and the first of his zombie series, Chaos.  Expose yourself to the inner workings of the twisted mind of Armand Rosamilia with Darlene Bobich: Zombie Killer.  You can dive into Trudge from Shawn Chesser, probably one of his best works.  And one of my personal favorites is James Cook’s offering of No Easy Hope.

These are all full length works to keep you busy through the Halloween season…but there’s a catch.  We’ve included a teaser from Joe McKinney’s The Dead Wait.  If you’ve never read Joe’s writings, you’re not doing yourself any favors.  He has a way of sucking the reader into the story and putting you on edge throughout the entire ordeal.

Now for the ‘spiel’.  You get the entire boxed set for the price of a single e-book.  WHY would we do this, you might ask?  Where’s the catch?  Are we only putting in HALF the story?  No, these are the complete first books.  If you ordered each of the books off of Amazon, this is what you’d get.  The catch is, we’re trying to EXPOSE all of these writers to YOU the reading public.  That’s why we make offers like this.

You may recall a while back when I mentioned that I ‘fell into’ a wonderful situation with a group of other authors that help promote each others work…this is that group.  A mish-mash of authors from all over the country with one thing in mind…to put our stories into the hands of as many readers as we can.  So, with that, I present to you, the readers, Epic Apocalypse, A Boxed Set of Apocalyptic Horror.

Posted by Heath Stallcup on October 29, 2013 in Uncategorized

Okay, I admit.  I’m new to all of this.  The idea that I get to do a radio interview, even a short one, to plug my writing is just too exciting for me.  I was practically giddy all the way to the station and sat somewhat nervously as I waited for Craig Stone of 105.5 the X-Factor to get me from the lobby.

He’s just as nice in person as he seems on the radio and we talked for a little bit before we recorded the short spot.  It probably wasn’t but a few minutes long, but we covered the important stuff and had a few laughs along the way.  He wanted to give me a chance to plug my latest book, Whispers, prior to Halloween since it is a ghost story…and, I think he likes the idea of the Monster Squad, too.

He told me that the spot will air today around 4:15 local time.  I was just thankful that it wasn’t live or I probably would have froze up.  He’s a true professional and had a wonderful way of putting me at ease.  He knew that I was pretty much clueless as this was my first time to be interviewed on the radio, so he took the reins and ran with it.  Afterward he told me that if I had friends or family out of the area, that they can download the radio app for their smart phone to be able to listen to the interview.  Unfortunately, my brain couldn’t absorb everything he said and I didn’t have the sensibility to write it down, so if you are out of the area and want to hear it, HA!  You’re on your own!  I have a Blackberry so those apps won’t work for me…

I had a great time and really enjoyed the whole experience.  I think my favorite part was watching him ‘turn on’ his radio voice as we began recording.  I actually had to stifle a smile when he started in, but I recognized that voice immediately as the one that comes out of my radio every day.  We had a chance to chat a bit more after recording the interview and just visit a little.  He really is such a nice guy.  It’s no wonder he’s the area’s top DJ.

Overall, it was a great morning.

Posted by Heath Stallcup on October 22, 2013 in Uncategorized

Or rather, ‘Tonight’s the night!’

The plan is for my publisher, Denise Brown, to ‘push the button’ to time the release around midnight.

The problem is…Amazon doesn’t always cooperate.  Sometimes it can populate as quickly as two hours, sometimes as long as the next day.  She has the files pretty much ready but there’s still some work to do.

I wanted the release to coincide with my wife’s birthday but this is close enough.  Too many readers like to have a weekend to enjoy a new book and I’d rather get it out in time for people to enjoy.

So, without further fanfare, I’m announcing the release of Whispers and hoping that those of you who read it will truly enjoy it.  If you do read it, whether you love it or hate it, please leave a review.  As I’ve stated before, we live and die by reviews, so every little bit helps.  So far, I’ve been fortunate in that one beta reader and two of the ‘characters’ in the book have already put up reviews for it before it is even available for purchase.  How cool is that?  I doubt there are many books out there that have had HONEST reviews put up for it before it was available for public consumption.  Fortunately, it was well received by those who read it.

Posted by Heath Stallcup on October 18, 2013 in Uncategorized

One Week To Release!

Yes, I know I’ve been rather excited about the release of Whispers, and now the countdown has begun.  One week from today, it will be released for public availability.  Originally, my plan was to release it on my wife’s birthday (October 20th), but since that falls on a Sunday and people who get a new book like to enjoy the weekend reading it, I figure a Midnight Friday release might be more appropriate.  Still, I’m going to call it her birthday since we’ll be celebrating it all weekend.  Hopefully, I can coordinate everything with my publisher so that she can ‘push the button’ at exactly midnight CST Friday and have it ready for everybody to enjoy.

You might wonder why I’m so excited about this particular release.  Well, it’s not exactly something I can put my finger on.  It’s not part of my signature series, the Monster Squad, but it is one of my favorite stories to date.  My missus has read everything I’ve written so far and she has other favorites, but this one is closest to my heart.  I can’t explain why.  Perhaps because I dedicated it to both of my dads?  Maybe.  My father passed in ’88 to cancer and my father in law has done his level best to be there for me even though I know filling those shoes isn’t possible.  Maybe it’s because it has small town law enforcement as the central characters…people I can relate to.  Maybe it’s because it deals with a love that runs so deep that even in death it can’t be denied.  Oh, wait.  I better not say much more.  I don’t want to give anything away.

If you’ve been one to search Amazon in anticipation, you’ll note that Whispers sits on their website but it says, Out of Print–Limited Availability.  That’s sort of a teaser.  It’s populated to Amazon and simply waiting for the publisher to ‘press the button’.  So…why wait?  Well, if you’ve followed any of my posts on Facebook, then you know that the grand majority of the characters are real people who donated their names to be used in the story.  I knew that the body count would be high in a story like this.  Rather than sit and pull out the last three or four hairs that I had left trying to think of names that sounded real, I asked for volunteers.  I posted in the thread that I would only use their names, not their likeness.  I couldn’t guarantee what would happen to them or what character they might be.  I literally printed out names, cut them out, folded them in half and put them in a hat.  As I made the list, I pulled out names and filled the list.  The Fates decided who went where.  Then I decided that those who volunteered their names should get a free autographed paperback for their trouble.  By coordinating with my publisher, she pre-ordered the books so that we could get them to folks BEFORE the book was available to the general public.  Factor in shipping to me, labeling and shipping out to them and we still had plenty of time to make it available before Halloween.

I owe a big debt of gratitude to my editor Todd Brown for getting this done in time and to my publisher Denise for having everything ready to do the pre-order and having the patience to let it sit while we wait for folks to get their copies.  I know this was no easy task.  The book was written in ‘Okie’ and spell check does NOT like southern speak.  At all.  Neither does grammar checkers.  Nope.  Not one bit.  This is one he had to do line by line, word by word.  And it is not a short story.  At over 150K words, this is a long story.

So, with all of that said, I hope that those of you who enjoy a good ghost story will give this one a shot.  It may or may not be up your alley, but it was certainly a joy to create.

Posted by Heath Stallcup on October 12, 2013 in Uncategorized

It’s no secret that my favorite holiday has always been Christmas.  Anytime I can open a package and be surprised, it reminds me of my youth.  Coming from a large family, Christmas was always a HUGE event.  Over time, it calmed down, but when I was a kid, I still remember presents piled nearly to the rafters and my climbing through the stacks trying to read the names on them.  Ah, the joys of childhood.
Well, UPS sent me an email stating that today is going to be another Christmas.  It wasn’t supposed to get here until the 16th, but as luck would have it, it’s EARLY!  How often does that happen?
I have packages coming that I’ve been waiting for a long time.  That same excitement builds, even though I already know what is inside the box.  To finally hold in my hand what I spent countless hours creating?  It’s beyond cool.  It’s nearly surreal.  What makes this package different than any of the others?  Let me tell you…
This time, my publisher decided to try something a little different.  She did a ‘pre-order’.  She ordered Whispers as paperbacks for me before they are available for purchase.  I didn’t know you could do that.  But she did it.  Hopefully, some time today, I’ll be receiving that box and can then make arrangements to get them back out to all of those fine people who offered their name up to be used in the story.
I don’t know why this has me so excited, but it does.  It feels like Christmas in October!

Posted by Heath Stallcup on October 7, 2013 in Uncategorized