For those of you who may not have heard yet, Armand Rosamilia is collecting fellow author’s books to send to the troops stationed in Kuwait and Afghanistan in April. If you are an author and want to help, join this effort and then get in touch with Armand at Facebook for the address to send your copies. Let’s do something positive for someone else! And props to Joe McKinney for previously doing an event like this and seeding the idea!

Not an author and still want to support the cause?  You can help with shipping costs AND get a really cool t-shirt, too! Just go to http://teespring.com/ASOT2014 and order the size you want.  Don’t want a shirt, but still want to help with shipping?  Reach out to Armand and he’ll get you the Paypal email address where you can donate to help.

Posted by Heath Stallcup on January 28, 2014 in Uncategorized

Is there really a point to this late night blog entry?  Sort of.  Kinda, but not really?  Most of my blog entries are at such odd times.  While most ‘bloggers’ try to time their blog posts to where the most people will see them, I write mine when I can.  You see, I have a new full time job.  It’s as a full time Grumpy to my youngest grandson, Poot.  Yes, that is his name.  I know it is, cuz I gave it to him.  Sometimes being a grandpa has its perks.

Anyway, with mom having to reenter the work force and daycare rates being so high, I got voluntold that I get to watch him.  At 5 months old, he and I have a lot in common.  We both have few teeth, little hair, we cry a lot, have strange smells that emanate from our bodies and we both can be pretty whiny.  Really, we’re about even at the moment. While I’ve got him beat in that I’m not in diapers, he has me beat in the ‘cuteness’ department…but that’s sort of subjective.

And apparently, we both have the attention span of a fruitfly because I almost forgot the point to all of this.  Due to my new full time employment, my online presence will be greatly diminished.  Okay, it will be almost nil.  Unless it’s late at night.  Same thing goes for my writing.  But, since I did most of my writing at night anyway, that part won’t really take a beating.

Since I was roaming the halls of this blog tonight, cleaning up a few corners, updating the ‘Works’ page by adding Amazon links to COD, (which came out a day EARLY for those paying attention) and just generally making things a little more presentable, I thought I’d drop a line to those few who frequent here and let you know…I may not be around as much as I used to be.  I still intend to meet the deadlines as set forth by my publisher.  At least, I will do my absolute BEST to meet those deadlines.  We still have Caldera penciled in for a March release.  We’re still planning on May for MS4 Blood Apocalypse.  I’ve got folks looking at Forneus Corson to see if there is some way to salvage it.  I’m currently working on MS5 The Return, and we’re hoping for a January release for it.  It won’t be until 2015 that things really get messy.  By then, I’m supposed to have a new release every couple months…alternating between an MS story and (hopefully) the Caldera line.  That is FULL-TIME writing.  So unless I can figure out how to teach Poot the in’s and out’s to a word processor…I may need to invest in a Velcro wall and a special suit for the little guy…and some noise cancelling headphones.

Posted by Heath Stallcup on January 21, 2014 in Uncategorized

If you’re one of the few who have been waiting for the release of MS3, Coalition of the Damned, your wait grows shorter.  The target release date is set for Monday.  But, if we’ve learned anything over the last year, we know that sometimes things happen.  So, if it doesn’t happen Monday, please, let’s keep the hate mail to a minimum.  Angry mobs with pitchforks and flaming torches, please try to be just a little more patient.  Besides, I’m not really sure if two people cursing in my yard shaking a pitchfork is REALLY considered an ‘angry mob’ these days, but hey, I’ll call it what it’s meant to be.

Either way, as announced before, we’ve included a wee peek into the world of viral infected zombies at the end of this one.  With luck, come March, you’ll be able to dive into a whole new world where man has fallen from his perch at the ‘top of the food chain’. 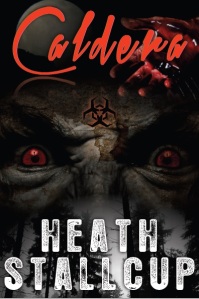 Caldera is my first dive into the zombie infected pool and it’s my hope that you’ll enjoy it enough to allow it to be my next series.

So, with that said, enjoy your weekend, wrap up whatever else you may be in the middle of reading and get ready for the third installment in the Monster Squad series.

Posted by Heath Stallcup on January 17, 2014 in Uncategorized

As the title to this blog entry suggests, the countdown to the release of MS3, Coalition of the Damned, has begun.  While I don’t have an exact date, it should be about a week (give or take) for the third installment to be released to the masses.

This release will be a little bit different than the previous Monster Squad books.  This time we plan to include a peek at an upcoming release.  We’ll be including a chapter from Caldera, my first novel delving in the zombie genre.  These aren’t your typical Romero style, slow moving, mindless munchers either.  These are the viral infected, fast moving, eat-anything-that-moves, rage type.  Pulling a chapter from early in the book, I’m hoping it will tempt you to take a chance on what I hope will become my next series.  Although Caldera was planned to be a stand alone novel without follow-up, I’ve been convinced otherwise by my beta readers and my missus.

As the release date draws closer, you know I’ll let you know.  And once it is ‘set in stone’, I’ll announce it.  Until then, keep believing, keep reading and keep checking under the bed.

Posted by Heath Stallcup on January 10, 2014 in Uncategorized

The audible version of my first release has hit a serious delay.  Apparently the Producer was simply too busy.  Or perhaps I simply chose wrong.  I can’t say for sure.  After numerous delays in production, the deadline was reached and passed and when I called him on it, he backed out of the project.  I’m seriously hoping that I can convince the narrator for Whispers to pick up the project as he is a much more professional producer…but that’s another story.

Of the few chapters that were posted for my review, my ears caught something I hadn’t really noticed before.  It had been brought to my attention by a few readers, but I always dismissed it as ‘adding realism’ to the military characters.  That something was the prolific use of profanity.  When I first wrote ROP, I never intended for it to actually be published.  It was a pet project meant only for my wife to read and to see if I could actually COMPLETE a writing project.  I based many of the military characters on people I had known in my past.  I tried to write their dialog based on how those guys actually spoke.  I guess that’s why I found it so humorous when one reviewer tore me to shreds because I had ‘the stereotypical huge black guy’…um…excuse me?  He was based on a REAL person.

Yet again, I digress.  So easily sidetracked without my coffee.  My point was, until I heard somebody else read the story back to me, I hadn’t realized just how prolific the profanity truly was.  Oh, an occasional F bomb during times of duress or emotional distress is understandable.  Or to truly emphasize a characters anger, but…ALL the time?  No, this wasn’t going to work.  So, I took a break shortly after beginning the draft for MS5 and began re-editing the profanity from the first four.

Honestly, sometimes it just doesn’t work.  When a guy that I knew tries to say ‘darn’ when it would have been a STRING of expletives?  But, these are characters, not the people they are based loosely off of.  Will it make the stories ‘readable’ for kids?  NO.  Situations happen in Phoenix that still just aren’t appropriate for kids IMHO.  Think Senator Franklin and the redhead in New Orleans.  Some kids, that scene wouldn’t phaze a bit.  Others?  I wouldn’t want to expose to anything like it.

So, that’s it.  Cleaning up the operators mouths a bit, fixing a few minor errors that I saw and then getting it ready for Aaron to read to see if the project is something he can take on.  Should make for a lot better listen when it does come out on audio.

Posted by Heath Stallcup on January 6, 2014 in Uncategorized