If you’re friends with me on Facebook then you should be well aware that Flags of the Forgotten went live just days ago. This is my first attempt into a totally different genre and to say that it’s intimidating as hell would be an understatement. I’ve always felt that it took a special breed to create a thriller. A true thriller keeps you on the edge of your seat throughout the book. Artists like Tom Clancy and Vince Flynn and Brad Thor know how to do this…and because of this, it took me two very long years to complete this project.

I knew I was jumping into very deep (and often dark) waters when I started this project, but it was one that I felt I had to complete, even if doing so meant falling on my face.
Hard.
With an anvil on the back of my neck.

But there it is, for anybody and everybody to read.

Am I proud of it? Actually, yes. I had a lot of friends step up and allow me to use them as characters. I hope I did them justice. I put a lot of effort into this story and according to the betas that read it, I pulled it off. I hope they weren’t blowing smoke to make me feel better. 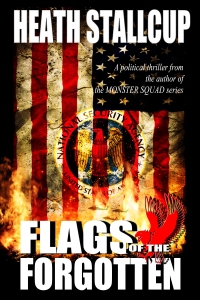 So, what’s the favor?

You know how writers feel about reviews. We live and die by them. I try not to beg y’all for reviews because…well, I just don’t like to ask. If you’re the type to leave a review, God bless you! Some people feel like it’s way out of their wheelhouse to ‘judge’ something that they don’t feel capable of doing themselves. I understand that completely. Putting a story out there kind of sets you up for the abuse anyway, but then to come to your readers with hat in hand and ask for that extra effort? It’s tough on both parties, I promise.

But that’s exactly what I’m doing.

Please, if you read Flags, please, please, please, leave a review. Good, bad, indifferent, it doesn’t matter. Not your cup of tea? That’s okay. I get it. Thank you for reading it anyway. Loved it and thought it was PERFECT? Great! Glad to hear it…and others would like to know too.

Why is this so important? Like I said, this is a totally new genre for me. I’m known for horror/urban fantasy. Thrillers? Not so much. In order to get Flags to pop up on Amazon’s radar, it has to have the reviews. And that’s where you guys come in. You’re the ONLY ones that make that happen. And that’s why I’m asking.

I’ve had people ask if I plan to make Bobby Bridger and his pals a series? That will depend a LOT on how well it’s received. If it’s a turd dipped in chocolate, then it’s still a turd at heart and nobody wants that. Especially me. But if it’s well received and folks dig it? Then yeah…I could see reviving this group for more action and adventure. But the only way that can happen is if word gets out and it takes reviews for that to happen.

So there it is. I’m asking you, my readers, to step up (and out of your comfort zones) and let others know what you thought of the story. For those of you willing to do it, let me take the time to thank you in advance. For those that just can’t being themselves to do it, I do understand and I still love you.

Posted by Heath Stallcup on June 14, 2018 in Uncategorized